Both presidential candidates agree that America’s aging infrastructure needs massive investment. Why wouldn’t they? Fixing and replacing our roads, public transit, and other critical infrastructure will benefit the economy long into the future.

The hard question is, where do we get the money?

One way is through public-private partnerships, or “P3s,” which can be used to finance, build, and operate public infrastructure. Interest in P3s is mounting, but so are problems. We’ve written about P3 troubles in Chicago, Indiana, Miami, and other places. And we’ve provided guidance on how to structure infrastructure projects with strong public protections and good jobs for disadvantaged communities.

As we’ve warned, the devil is in the details. In 2008, Chicago learned the hard way when they sold their 36,000 parking meters to a Wall Street-led consortium. The city quickly discovered the meters had been sold $1 billion under their value. Indiana, Virginia, and San Diego have faced bankruptcy, in part because of overly optimistic traffic projections on toll roads.

But recent news out of Texas might make a failing toll road there the most scandalous P3 to date.

The San Antonio Express-News has published an investigative story on the southern leg of State Highway 130, a 41-mile toll road between Austin and San Antonio with the highest speed limit in the nation. To finance, build, operate, and maintain the highway, Texas signed a 50-year P3 in 2006 with a private consortium including Cintra, a Spanish infrastructure developer, and San Antonio-based Zachery Construction Corp.

Less than a decade later, in March of this year, the consortium filed for bankruptcy with $1.6 billion in debt on the books. But the problems started much earlier. Shortly after the highway opened, homes in nearby Lockhart, TX, began to flood, and just two years later the road began to show signs of persistent pavement problems.

The Express-News concluded that the P3, which promised an “85-mile-an-hour speed limit, no direct, up-front cost to state taxpayers, and millions of dollars in toll revenue for the state” failed taxpayers, drivers, and the Texas Department of Transportation (TxDOT).

The story is a long read and I encourage you to work through it. But the deal at the center of the controversy is a cautionary tale for future P3s, so I summarized the takeaways:

Some people still made a lot of money. At least 13 Cintra and Ferrovial (Cintra’s parent company) subsidiaries were involved in the highway’s construction and operation. That includes Central Texas Highway Constructors, a joint venture of Zachry Corp. and Ferrovial, who played a key role in designing and building the road. The consortium, dubbed “SH 130 Concession Company,” is the face of a complicated web of construction and investment companies: 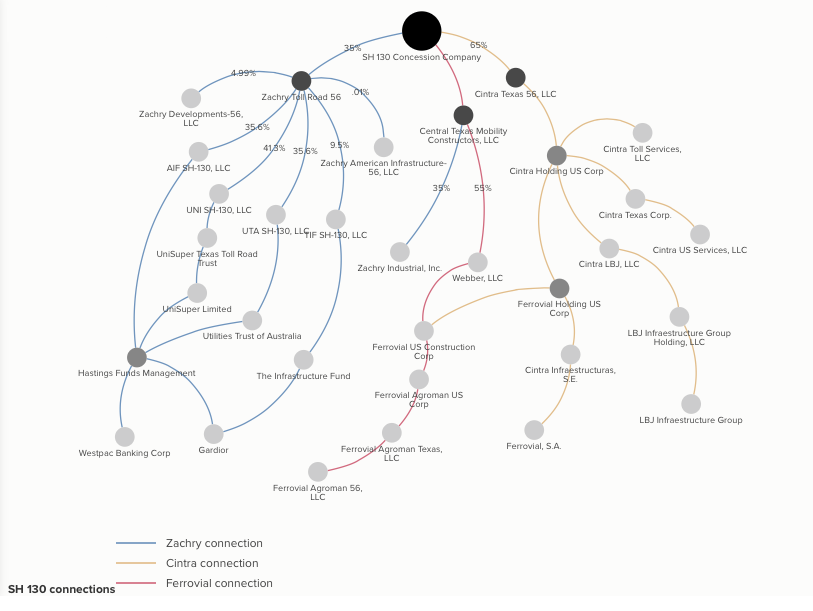 Poor performance has led to ongoing conflict. In 2014, an engineering review found 160 pavement defects and rough rides for drivers. In August, TxDOT notified the company of a “persistent developer default,” meaning it had a high number of “failures to perform” in accordance with its contract.

Unintended consequences continue to mount. Lockhart residents have struggled with increased flooding since the highway’s construction. TxDOT claims the consortium failed to seek the city’s approval of the road’s drainage plans and has directed the company to fix the problem. SH 130 Concession Company says the state should pay the extra $1.2 million to fix the flooding issue, which continues.

A consensus is growing that infrastructure across the country needs serious investment. Public financing is the least expensive way to fund a renaissance in American infrastructure. But if a P3 is the only way to get the job done, we should take Texas’s State Highway 130 as a lesson in what not to do.

We’d love to hear from you: info@inthepublicinterest.org.

Please sign up for our newsletter. You’ll get a story about privatization’s impact on the public (prisons, education, the environment, and more) once a week in your inbox.