For decades, runaway outsourcing of public services and assets enjoyed nearly nonstop momentum at the state and local levels. Beginning in the 1970s and 1980s, lawmakers of all political stripes were lured by the siren song of the private sector administering public services “better, faster and cheaper” than the government.

In the early-1990s, the Democratic Clinton administration championed “reinventing government,” a slogan and framework that promoted handing over control of public services to the private sector. The Great Recession prompted privatizers to become even more brazen, as cash-strapped cities, counties and states looked under couch cushions for spare change to patch budget shortfalls. In the midst of the financial
crisis in 2008, one chairman of a major finance company, addressing the annual meeting of the National Council for Public-Private Partnerships, proclaimed “desperate government is our best customer.”1 Corrections Corporation of America (CCA), the largest private prison company in the United States, seemed to agree.

CCA went so far as to send letters to 48 state governors proposing that CCA take over public prisons in exchange for a state guarantee to keep the prisons filled to 90 percent capacity – or to pay CCA for the empty beds if this prison quota was not reached.

However, signs suggest that taxpayers are beginning to question the rush to privatize, and in some cases they are demanding that services be returned to the public sector altogether. Generally speaking,
there appears to be greater public awareness of outrageous outsourcing practices today than in the past. For example, last year In the Public Interest published a report that found an alarming 65 percent of state and local private prison contracts already include the kind of prison quotas that CCA
sought in its letter to governors.

In addition, arguments against reckless outsourcing emerged and evolved. For example, new research revealed that privatization contributes to income inequality and a degradation of middle-class communities.

The past few years provided specific watershed moments as well. In 2009, a massive privatization debacle unfolded in Chicago where Windy City taxpayers discovered they were on the losing end of a 75-year deal that handed over control of 36,000 city parking meters to a Wall Street-backed consortium. In 2013, private contractors badly bungled the federal healthcare.gov website and state-based websites in five states. The same year, respected media outlets including Governing and Bloomberg BusinessWeek published headlines like “Outsourced Government: Have We Gone Too Far?” and “Why Private Contractors Are Lousy at Public Services,” respectively. Even the Reason Foundation – a leading proponent of privatization for decades – recently admitted that it is not a panacea. “Is privatization a magic wand?
Is it always going to come in and save you money? No. You have to do this well. You have to do your due diligence. You have to do a good contract and then you have to monitor and enforce that contract,” Reason’s director of government reform Leonard Gilroy told the Atlantic in April.

But 2014 was the year that taxpayers truly began reclaiming control of their public services. As the Atlantic reported, “[i]n states and cities across the country, lawmakers are expressing new skepticism about privatization, imposing new conditions on government contracting, and demanding more oversight.” To date, 19 states introduced proactive legislation to reign in reckless outsourcing and promote
responsible contracting reforms this year. Some of these reforms were based on ITPI’s Taxpayer Empowerment Agenda, common sense legislative proposals that promote transparency, accountability, shared prosperity and competition to contracting procedures. For example, it includes a ban on outrageous contract language that guarantees corporate profits, such as prison quotas; or a requirement
that private entities that run public services open their books and meetings to the public just as government must. 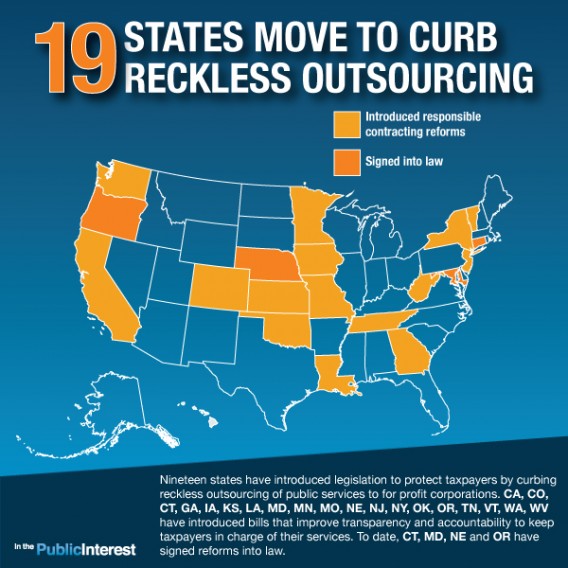